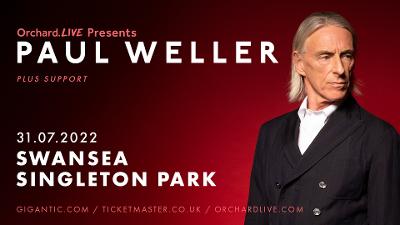 On 14 May, Paul Weller released his 16th solo album since his self-titled debut in 1992, his fourth in as many years and his second in just under twelve months following June 2020's magnificent, chart-topping On Sunset. It's not hyperbole to state that this new album, titled Fat Pop (Volume 1), is among his most compelling collections, bar none, including all of his era-defining work in the 1970s and '80s with The Jam and The Style Council. It's an absolute scorcher.

The show at Swansea's Singleton Park that will feature work across his prolific career & his brilliant new material, follows successful concerts on the site with Noel Gallagher, Jess Glynne & Catfish & The Bottlemen and again is promoted by award winning promoters Orchard Live. Pablo Janczur from Orchard Live said ''We are thrilled to be working again with an unbelievable artist like Paul Weller and bringing the Mod Father to Swansea!''