Oystermouth Castle dates back to the 12th century and continues to undergo specialist conservation work.

In autumn of 2010, work began to undertake essential works to conserve the castle structure. The £3.1 million partnership project was funded by the Heritage Lottery Fund, Welsh Government Cadw and Visit Wales, European Regional Development Funding (ERDF) and the City and County of Swansea, with great support from the Friends of Oystermouth Castle, a locally formed volunteer group.

12th -14th century Oystermouth Castle has long been a forgotten, rotting historic monument which in its past has seen the likes of Kings, Lords and Ladies residing within its thick stone walls. Originally built as a stronghold and to keep people out, 2010 marked a new era in the history of the castle.

Works started to construct new access points and footways to help get a wide range of people into the castle and reconnect the structure to the Victorian seaside village of Mumbles.

Visitor facilities have been provided within Alina's Chapel, which was never previously opened to the public and a modern glass bridge inserted at the chapel level, to represent a 2011 layer of history being added to the mediaeval structure.

During July 2011 to September 2011, 13,000 visitors were attracted to the castle whilst works were still ongoing. From October 2011 to May 2012, further works took place to stitch back together the ruinous structures rising from the limestone bedrock within the castle walls.

During the works, various discoveries of mediaeval murals, inscriptions, coins and staircases within staircases have provided puzzles for conservationists and architects to resolve.

In June 2012, a whole mediaeval labyrinth of vaults, chambers and rooms within the walls of the castle were revealed for people to discover.

The Castle may have been closed to the public for over a year due to the ongoing Covid pandemic, but that hasn't stopped vital work going on behind the scenes to continue to protect and conserve this important monument. Over the next couple of months, vital conservation work will be carried out on Alina's Chapel.

Most people will have noticed the scaffolding up around Alina's Chapel and that this has been here for some time. This work took a long while to get right, with various delays and setbacks along the way but now there is movement! We need to get right to the tops of the walls to remove what we call the 'soft capping'. This is simply a layer of turf that is laid on top of the walls to slow down water ingress that seeps deep into the stonework, which can then cause the mortar to fragment and the stone to crumble. It also acts as a thermal blanket to protect the tops of the Castle from frost damage in deepest winter.

The last 'soft capping' was laid in 2011 and most of it is now weather-beaten, so it needs removal and replacement. This work is really important, particularly inside the Chapel, as there are still remains of 14th Century paintwork, which although we cannot protect forever, we can certainly help to slow down the decay by replacing the soft capping. There are also other areas of the Castle that have a similar soft capping. However, depending on exposure to the elements, some has thrived and some has failed. 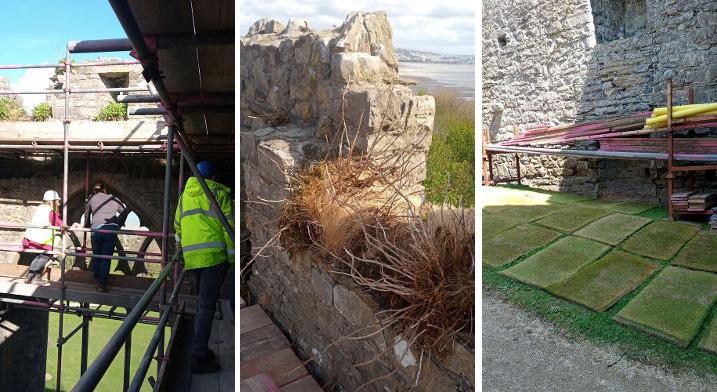 This week saw the contractors arrive in earnest to begin the painstaking job of removal of the capping. The challenge has also been keeping the turf well-watered throughout the warm spell we witnessed recently! It seems that most of the valerian weed that proliferated throughout the old soft capping has been killed off which is good news. However, it is not merely a case of just lifting off the old weathered turf. It needs to be removed slowly in case any roots have permeated into the stone work below. Also, we do not know what state the stone may be in beneath so this may need to be repointed with the correct lime mortar mix before the new turf gets laid on top.

A sample of the work was seen by the Cadw inspector earlier this week, who has approved the method that the contractors are proposing. This is to reduce the previous slope to the wall heads by building up with new stone to encourage water run off, away from the walls as much as possible. Slate slips will be used within the mortar to differentiate the old stone with the new repairs to the wall. 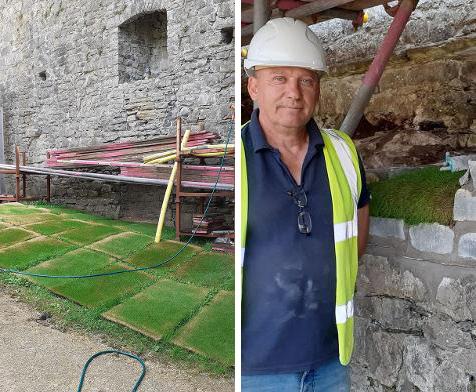 Over the last month or so, conservation work has stopped and started due to some of the turf not being suitable, with more needing to be ordered to complete the job. The large pieces of turf are hoisted up to the top of the scaffolding and then cut as needed. Tweaks in the specification given to us by Cadw have also been required to continue the work. However, most of the tops of the Chapel walls are now complete and have been consolidated with new lime mortar. The much-needed drizzly Welsh weather has been a blessing in disguise, as the turf has needed to be hand watered every few days until it beds in. 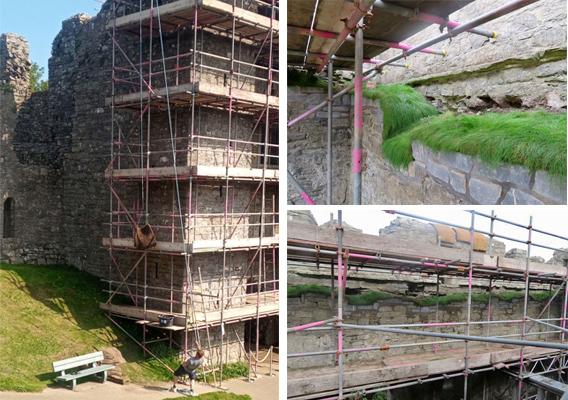 It is with great relief that the essential repointing and softcapping work inside Alina's Chapel is now complete. The newly layed turf has taken well over the last few weeks, just in time to protect the walls from the frosty cold weather. However, just as it was a mighty job to erect the scaffolding back in March, it was equally a mighty job to take it down!

Everything is covered in dust so there is now a big clean-up operation taking place before we hopefully reopen next year.

The council are now working closely with the contractors (Taliesin Conservation) to address other areas on the battlements and the gatehouse to remove other softcapping that has failed. They will also be responsible for installing three new grills to some of the windows, that will increase safety and security. 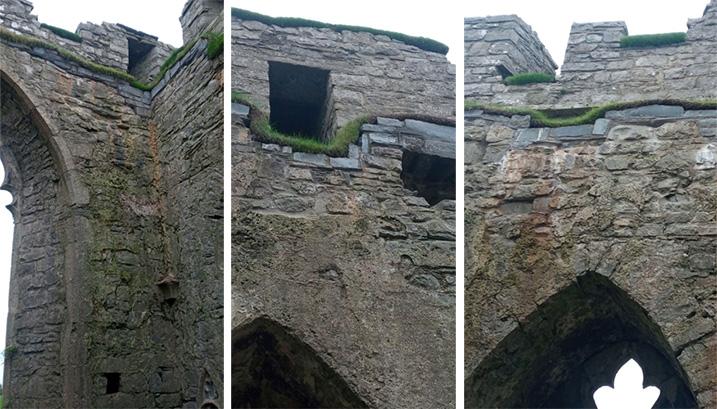