Have your say on the draft Active Travel Network Map

We'd like to get your feedback on the draft Active Travel Network Map for Swansea. 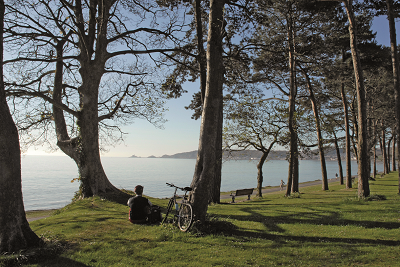 The Active Travel (Wales) Act emphasises the importance of involving local people when local authorities in Wales are planning their networks of routes for walking and cycling. It's important the opinions of people who are new to walking and cycling, as well as those who already get about on foot and by bike are fully considered.

The council aims to provide a network of active travel routes which will allow for walking and cycling to become the most natural and normal way of getting about for local journeys. This will also promote the health and well-being of everyone and make Swansea a more liveable place.

The focus is on routes which serve everyday journeys rather than routes that are just for leisure use.  This means we are particularly interested in existing and future routes that link to schools, shops or employment sites.

Initial engagement earlier in 2021 asked members of the public for views on improvements to active travel, and the gaps in active travel routes across the area. This feedback has helped to inform the development of a draft map that shows potential new routes that could be implemented in the future. These routes are proposed to be shared use, for people both walking and cycling, and the exact nature of the routes will be confirmed in the final map. It is particularly important that the map captures all the possible future active travel routes because, if a walking or cycling route is not included in the map, the Council cannot bid for funding to implement it.

The future routes shown on the draft map represent ideas for a longer-term network and our longer term aims.  The delivery of these future routes will take several years, would be done in phases and is subject to securing appropriate funding. However, having the routes identified on the map is an important first step which will allow us to plan for the future.  As we deliver new routes and improvements to existing routes, these will be subject to their own design and consultation process.

Our new Active Travel Network Map will update and replace two maps we are currently using - these are the Existing Route Map and the Integrated Network Map.

Our draft map forms the basis of a 12 week formal consultation where we are encouraging everyone to have their say.  The consultation is open until 15 November 2021.

We'd like to hear your views on both the existing and the proposed new routes included on the draft Active Travel Network Map. If something is missing, please tell us about it.  Perhaps you know of a good footpath linking a residential area to a school, or a cycle route you would like to use to get to the shops.  Or perhaps you have an idea for where a useful new route could go.

We'd also like to hear your comments on which future routes you think should be implemented as a priority.

An overall network map and maps of 6 localities are shown below.

During September and October, we will be holding exhibitions and events to explain the maps and give everyone an opportunity to have their say.  Please keep an eye on our website for details of these.  We will be publishing more details soon.

How we will use your comments

Once we have gathered all your feedback we will review the map, make changes where appropriate and then submit the map to Welsh Government in late 2021 for approval. The map will then form the basis of the work that we do over the next fifteen years to improve walking and cycling across Swansea, although we will consult again on a refreshed version of this map every three years.

Fill out the online survey

The link below takes you to an online survey where you can select which locality area you want to comment on. You can comment on more than one locality map.