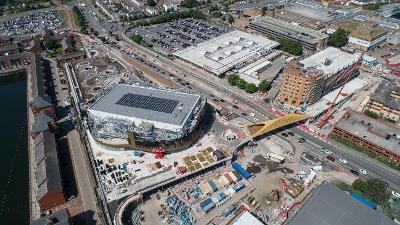 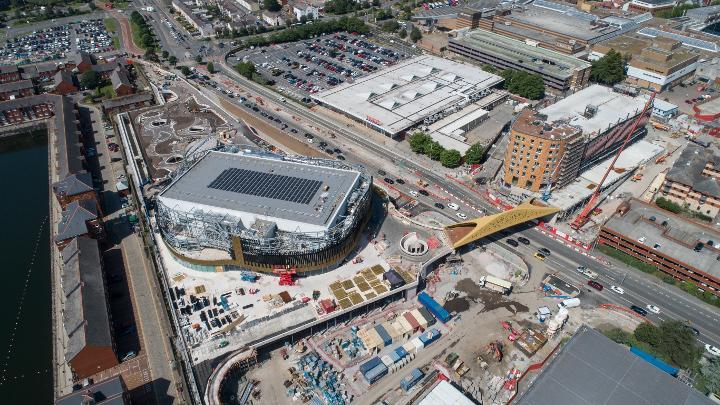 Each panel will be equipped with LED lighting technology, enabling the hosting of light shows around the outside of the attraction. Once the arena is complete and open, the panels could also be used to promote upcoming shows, concerts, conferences and other events. Over 1,600 panels are being installed, complete with more than 95,000 LED lights.

The Copr Bay phase one district is being developed by Swansea Council and advised by development manager RivingtonHark.

Construction work on Copr Bay phase one - led by Buckingham Group Limited - will be complete later this year, with the 3,500-capacity arena opening its doors in early 2022.

Cllr Rob Stewart, Swansea Council Leader, said: "The Copr Bay phase one development is really now starting to take shape ahead of the completion of construction later this year. Worth £17.1m to the city's economy, it will attract hundreds of thousands of new visitors to Swansea who will stay in our hotels, take local taxis and spend in our local shops, restaurants and bars. This will help our city's economy grow, while accelerating Swansea's recovery from the pandemic.

"Not only will Swansea residents and visitors to the city soon be able to enjoy the world-class Swansea Arena, but they'll also benefit from the first new city centre park since Victorian times and better links than ever before between the city centre and our stunning seafront.

"Swansea business The Secret Hospitality Group is on board to run the café and restaurant in the coastal park, and more Copr Bay phase one tenants will soon be announced.

"This development will also act as a catalyst for more investment in Swansea, bringing even more jobs to the city while further raising Swansea's profile across the UK and beyond as a first-class city to live, work, study and visit."

Swansea Council is financing Copr Bay phase one, with some funding for the arena coming from the Swansea Bay City Deal. The Copr Bay bridge forming part of the scheme is part-funded by the Welsh Government's Active Travel fund.